As the demand for mobile games continues to grow more and more mainstream developers are making in-roads to the App store. Konami is one such developer. They made their intentions clear about plans to move into the App store and followed through with PES Club Manager.

They’ve given us a fun free-to-play game that shows that they just might have a profitable time in the mobile gaming marketing.

PES Club Manager eases you into the game with the assumption that you have never played a mobile football manager game. The tutorials walk you through everything that you need to know about how to control the game and manage your team on the pitch on and off it. You have complete control over the transfer of players, the formations that you wish to play, which sponsors you want on your shirt and the training regime.

Your team starts in the lower leagues and gives you the challenge of guiding them first to promotion and then to victory in the elite leagues. Your squad starts with a bunch of unknown players and as you advance in the game getting more currency you can invest in better players including 5000 licensed players from the real world.

The decision to make players start in lower leagues gives the game a difficulty curve. The first 3 dozen matches are easy until you can gain promotion then the games get tougher.

To be competitive in the top leagues you have to strengthen your team. Buying players occurs in real-time markets where you use game coins to bid against real-world players for elite footballers. Winning the bid means that the player is yours.

The player qualities are based on stamina, speed and shot power among others. Some players have special abilities such as one-time shot and one-touch pass. The sheer volume of detail that they give to each players’ abilities is impressive which is probably because they used their console engine to run the mobile game.

Konami also added a morale meter, a feature that is becoming increasingly popular in football manager games. Keeping an eye on the morale-meter is important as it affects the players’ performances on the pitch. You have to keep the squad rotated so that the players that you have on the bench don’t feel too bad about not being used. 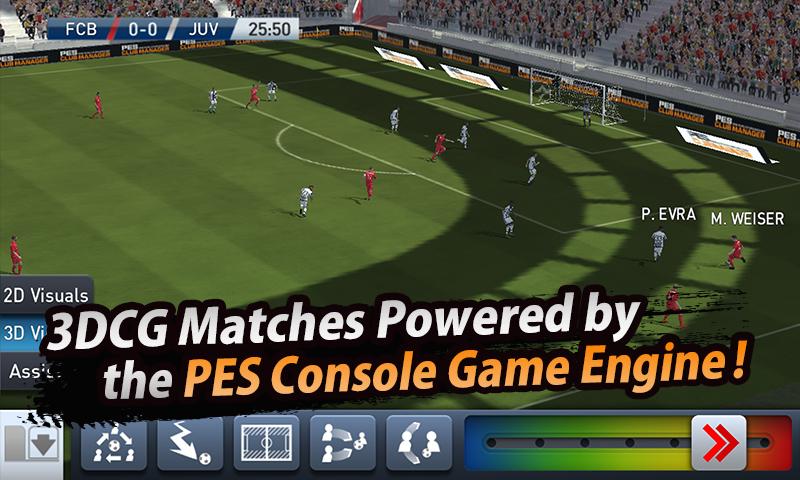 The players have to be trained to keep them in top shape, another feature that most manger games nowadays have. Thankfully the training system in PES Club Manager for PC is simpler than it is in most football manager games.

The app’s display is beautiful, almost as beautiful as if it was rendered on a console. Players have the options of letting the games play out in 3D or 2D and you have the option of changing your tactics mid-game to adapt to the situation and the opponents tactics.

Monetization is part and parcel of any F2P game but in PES Club Manager for PC it is not intrusive. You never feel pressured to spend real money.

PES Club Manager for PC is hard to put down. You always want to play ‘just one more match’.

How to Download and Play PES Club Manager for PC:

If you liked this post, don’t forget to rate and share. Also if you can’t run PES Club Manager on PC/MAC or any other issue, write in the comments below and we’ll help you.